Today would have been, should be, Mack’s twenty-sixth birthday. Maybe twenty-six would have been the age when she finally admitted she was a “grown-ass woman.” Oh, probably not. Who am I kidding? It was a status she was never eager to attain. When she was ten she declared to me her intention to remain ten forever, and I could see in her dirty, freckled face that she was speaking her truth. I never doubted the veracity of her assertion, either, because even when she became a serious student in college she never let go of the child she was at ten. Both of her parents are old souls, but a youthful heart was in Mack’s DNA. She inherited my father’s Peter-Pan gene, the gene that sits between the goofball gene and the I’m-gonna-eat-junk-food-and-sit-on-the-couch-in-front-of-the-TV-all-day gene. She inherited both of those other genes from Frisky Pratt, too.

As Mack’s inner circle of close friends are each making their own way in the world now as grown-ass women, I have been passing many melancholy minutes lately wondering where Mack might be living and what career she might be pursuing if she was still here. So deeply pulled into these wonderings, or daydreams I guess you might call them, I sometimes wake up and fifteen minutes are lost and a vivid scenario of Mack’s could’ve-been life is flashing like an illustrated storybook in my brain. Mack dreamed of a writing career in television, and that is my favorite daydream for her. She’s a writer for a sit-com in Hollywood. She’s working with Joss Whedon to bring back Buffy the Vampire Slayer. She’s pitching Mack’s Makin’ Bacon, her own comedy cooking show for the Food Network. Or she’s living in my guest bedroom writing a screenplay. Goodness but do I yearn for that latter daydream. But daydreams are not terribly productive, I’m afraid, and Mack’s old-soul Momma Bear usually awakens from those daydreams emotionally bruised, sadness giving way to anger at all that Mack missed out on and all the things that have happened that I have been denied sharing with her. Like her twenty-sixth birthday.

Milestones like birthdays are trigger points for grief. The day will be rough. There isn’t enough candy in the world to sugar coat that truth. The paradox of my grief is that every day I must live in a world without my daughter, I get another day of practice living in a world without my daughter. The pain is no less keen, but the callouses of long-time sorrow limit the blood loss when the sharpness of a milestone, or a bad day, break open the heart. Again. And again.

I will no doubt pass a few melancholy minutes. However, I won’t be wondering what Mack would be doing on her twenty-sixth birthday, because I’ll know exactly what she would be doing if she was here. She would be embracing social distancing, happy for an excuse to be alone on her couch in front of the TV, eating junk food. She’d settle in for a birthday-binge-watching bonanza, surrounded by Funyons, Flamin’ Hot Cheetos, sour candies, two giant cans of Arizona Iced Tea, and the best looking Italian sub, wrapped in plastic, that was available in the deli case of the convenience store where she shopped for her birthday feast. She would get comfy with her two dogs, one an Irish wolfhound and the other a pug, and both named for characters on television (maybe Leslie and Ann, but who knows with that kid?). She would spend the day watching shows she’d already seen a hundred times, consume her food in cozy sweatpants and reclined repose, text her besties and her momma and her sissy, giggle to herself, and tweet about the upsides of quarantines and restaurant closings and how she wished her school had been cancelled for a month when she was a kiddo.

Mack would not be mad that COVID-19 ruined her birthday, cancelling dinner plans or drinks with friends. She wouldn’t see it that way at all. She would look at the down time as a chance to relax, be alone with her own thoughts, and do absolutely fucking nothing. Every day I miss Mack, and today I’ll miss her more. Every day I talk to her, and today will be no different. She’s heard a lot of swearing lately, because I frequently dial her in for my dialogue with the morning and evening news. She’ll laugh as I let the f-bombs fly, and she’ll shake her head at me because she thinks I let the orange moron and his clown-car of a government get too much under my skin. “Sure, Momma Bear, he’s a genuine ass,” she’ll say, “but don’t let him push all of your buttons.”

As soon as my eyes pop open I’ll miss kissing Mack on that big freckle on her left cheek. I’ll shed some tears into my morning coffee. I’ll take Mack with me to vote in the Illinois Democratic Primary, let her pick which old codger I vote for, and I’ll tell her how furious I am that I didn’t get to vote for Elizabeth Warren. I’ll try not to swear at NPR, protect one or two of my buttons, and take Mack’s lead and relax. It’s her birthday, after all, so we all should let her make the plan. I’ll probably need Mack’s spirit to stick around for the entire day, and maybe she’ll bring her grandpa with her. I trust Mack will chill me out when I get upset that COVID-19 is keeping me from the draught Guinness I traditionally enjoy on her birthday. I trust she will keep me grounded in the present, holding my hand as I take the day as it is and give myself up to the cool breeze of life, hitting my cheeks and reminding me to live and to breathe and to refrain from counting the calories and the dairy content of the Mac-n-Cheese my sister is planning for dinner. 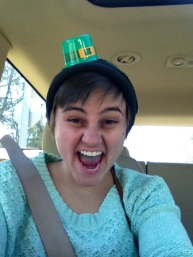 Mack Day 2020 will be a rough day. That is no lie, and certainly no joke. But when it’s over, I will put my head down on my pillow next to gratitude. Gratitude for Mack and her presence in my life. Gratitude for the vibes of a Mack-Day mood. For twenty-six years, first in person and now in spirit, my daughter has been teaching me about life. I am not always a quick study in Mack’s be-chill school, but old souls always at least try to be at the head of the class. I am a work in progress, and Mack knows it. I’ve got a sneaking suspicion she hangs around not only to tease me and to teach me, but to make sure I don’t beat myself up for not getting straight “A”s.