Last week, we said bye-bye to Benji, the spirited and plucky little Jeep Wrangler that raised my two spirited and plucky little girls. He had chugged to a stop late last fall when Savannah parked him on Winnemac Avenue, in the middle of the block, just south of Winnemac Park in Chicago. He had gurgled and rattled when Savannah cut the engine, just like he always did in the waning years of his life, as he struggled to be the peppy and happy car he had been in his youth. But, sadly, it was there on that sleepy, residential street, where a dead battery, a finicky starter, a worn-out transmission, and one final Windy City winter finished off the poor, old bastard once and for all. Mack would have thought it a fitting final parking place for her beloved “Benj” on a street with her name in it and very near a softball diamond, like so many other softball diamonds, where Benji often collected a pitching mound’s worth of dust waiting for Mack to collect him after a practice or a game.

Savannah probably never should have taken that 1997 Jeep Wrangler to Chicago with her in the first place, but it was just months after losing her sister and she lacked the heart to let go. Sometimes inanimate objects hold the keys to our most cherished memories. Benji had been Savannah’s high school and college car, and then Mack’s high school and college car, and then Savannah’s car once again. The sister connection in that gun-metal blue bucket of rusty bolts was strong and the emotional attachments deep; and even though it made not a lick of sense whatsoever to keep an unreliable car with a long list of ailments in Chicago, it made absolute sense to Savannah’s heart. So for two years, in honor of her sister, Savannah held on tight, patiently weathering the inconveniences of Benji’s senior citizenship.

But when spring came this year, so too came the realities of driving and parking in Chicago, especially in a car that needed hundreds of dollars in repairs. As the daffodils bloomed and street sweeping loomed, Savannah understood that she had to either sell or at least to move Benji from his pastoral parking spot around the corner from her apartment. Savannah made the difficult decision to let Benji go. It was time. It was past time. It is true that the tangible artifacts of our lives—big and small treasures into which we place our memories for safekeeping—possess the spirits of ghosts we wish would linger. But material objects do not possess the permanence we so desperately seek when we entrust them with our memories in the first place. Savannah held on to Benji long enough to learn that her connection to her sister was bigger and deeper and far more permanent than a beat-up, old car, however well-loved the car.

Although Jeeps, even old ones that do not start, will fetch at least some pocket-money, Savannah did not wish to profit from a decision that was breaking her heart. NPR really does take old cars, it turns out, and Savannah chose this graceful exit for our old family friend. We mailed in the Jeep’s title, and last week NPR took the car away. Rephrase: took Benji away. Benji with silly string sun-baked onto the dashboard and the driver-side door, evidence of a “hit” by Mack’s softball teammates. Benji with the duct tape holding his glove compartment in place. Benji with his broken and failing mechanical systems, a flat tire, a bleached out and ripped rag top, and a “Life is Good” spare-tire cover still on the back. Benji went away with a little piece of Savannah’s heart, and a little piece of mine, as well. But Benji did not go away with his gear shift, because Savannah snagged it as a final souvenir. And he did not go away with our memories, either. We will keep those, as well.

Savannah poses for one last photo in Benji

Benji was just a base-model, 1997 Jeep Wrangler, but he was the vehicle of some very important McDermott family memories. He took us on summer night drives to watch outdoor, local theater at Lincoln’s New Salem. He delivered us, albeit uncomfortably, to the family cabin in Wisconsin after our big car broke down one summer. He taught both of my girls how to drive a stick-shift, and he suffered all of the terrifying lessons they each gave to their teenage friends. He kept Savannah safe when she rolled the Jeep over and landed upside down in a ditch on a snowy ride home from college. Benji was just a car. But he was the spirited and plucky car of my spirited and plucky girls. And that, in and of itself, is grand. 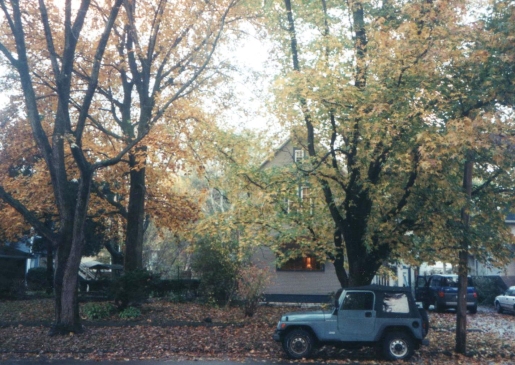 Benji parked in front of our house in Springfield

Mack loved her Jeep, and I love the memory of her loving her Jeep. I have painted this happy picture in my mind that Benji and Mack are together again, reunited like friendly old ghosts, out on the open road somewhere in the beautiful universe. Mack is driving with the top down on a warm summer day; Benji is new and shiny, engine humming. Music is blaring and Mack is singing, big sunglasses covering her sweet, freckled face. She’s grinning, driving way too fast, and breathing in the feeling of freedom that the wind bestows upon the spirit of carefree girl in a Jeep.

The glowing eyes of our cat on top of the Jeep 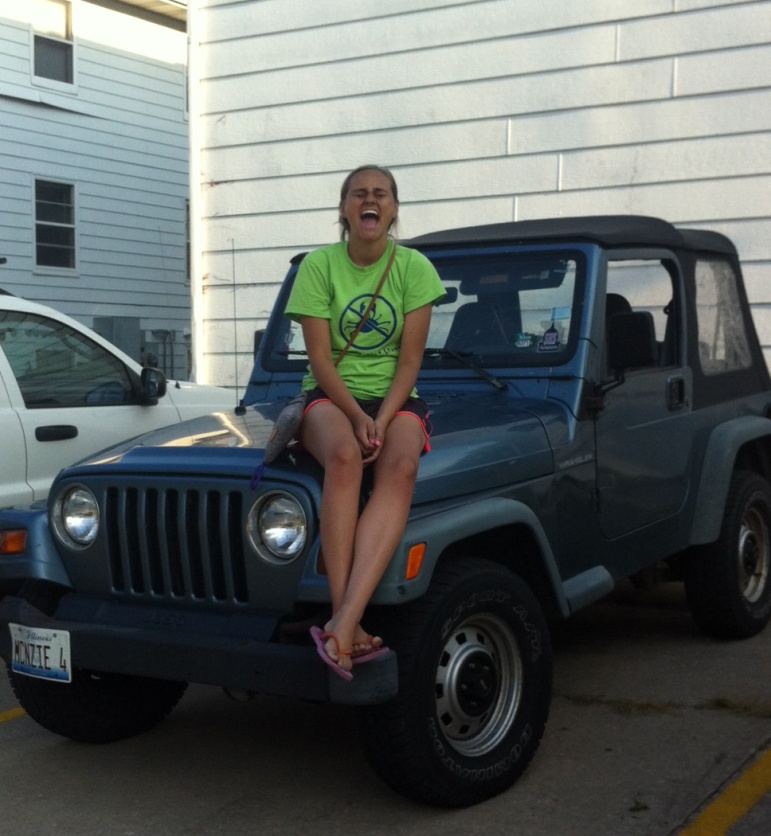