Nearly every single day in my professional work as a scholarly editor, I learn wonderful and random historical facts and fascinating untold or little known stories about the American past. While my research focus each day may be very specific, looking for a date or trying to identify an obscure reference in a letter, my eyes are always wide open for facts or stories that reveal the humanity of the historical figures I study.

Julia Lathrop at work at the Children’s Bureau.

Recently, I was scanning through a biography of Julia Lathrop and mining information for a series of footnotes on this important reformer and close friend of Jane Addams. Lathrop, a native of Rockford, Illinois, and a graduate of Vassar College, was a social settlement worker and resident of Hull-House in Chicago for twenty-two years. During that time, she investigated and wrote about tenement and labor conditions, drafted and lobbied for labor laws to benefit women and children, became the first woman appointed to the Illinois State Board of Charities, worked for the protection of immigrants, helped establish the Chicago School of Civics and Philanthropy, and contributed to the development of a juvenile court system in Chicago, which was a brand new thing under the progressive sun. And as if all that work in Chicago and the great state of Illinois was not enough, she became the first woman to head a federal agency when President William Howard Taft appointed her to head the newly created Children’s Bureau in the Department of Commerce and Labor in 1912. In that post, Lathrop established the hard-hitting mission of the agency and won fame and widespread respect as a leader. She retired in 1921, having accomplished the life’s work of at least a dozen good men.

I am in awe of Julia Lathrop. She was a fearless, funny, brilliant, fierce, sharp-dressed, bad-ass, social justice warrior. I am just an editor and historian, who is only occasionally funny. I wear yoga pants and study social justice warriors from the comfort of my home office. Julia was a super hero, and Stacy is just a scholar who is lucky to study the life-changing work that the women of Hull-House did to make the lives of children, women, laborers, and immigrants better at a time when women were supposed to shut-up, stay at home, and take care of their own familes. Nothing more.

So, okay. I’ve got nothing in common with Julia Lathrop, right? I am not fit to shine that woman’s patent-leather, Edwardian boots.

But then I read in the Lathrop biography one of those human stories for which I am always on the prowl. All of sudden, I could picture the two of us, J. Lathrop and Dr. Stacy, spending an hour or two together, walking. Because holy cow, and oh my lands, it turns out that Julia Lathrop was a walking fool, just like me! Lathrop starting walking for exercise when she was a student at Vassar, which encouraged outdoor activities for women, and she was a life-long “just do it” walker. Not casual strolls around the block or through the park. Nope. Not for me, and not for Julia, either. I’m talking about regular, serious, long-distance, walk-even-if-you-don’t-have-to kind of walking.

On Thanksgiving Day in 1919, when Lathrop, age 61, was the head of the Children’s Bureau and living in Washington, DC, she set out on a long walk with her friend and Children’s Bureau colleague Grace Abbott. Lathrop was an affluent woman and agency head who could have easily called for a car and driver, but she wanted to walk the three miles to the Pan American Union Building to attend an international labor conference. And so, she walked the three miles and made an appearance at the conference, where she no doubt uttered a few brilliant statements about her work and probably disarmed at least one over-important man with her charm and good humor. After the conference, she and Abbott ate some Chinese food with friends and then walked the three miles back home.

I love this story! It is precisely the kind of human story I look for amid the lofty historical facts of the lives of the American super heroes I study. I am captivated by the idea of Julia Lathrop walking across Washington, dressed, no doubt, in a fine frock and a hat that was the bee’s knees. She was an accomplished, successful, extraordinary woman. Yes, she was, indeed, a super hero. But in one way, she was just a woman. A woman who walked. Just like me. 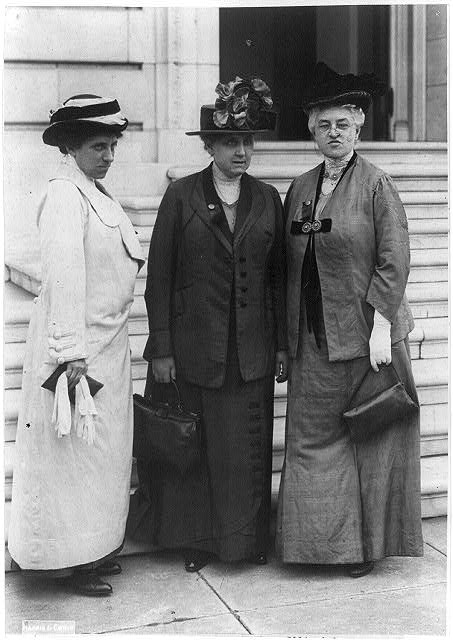 Note: Both images are from the Prints and Photographs Division of the Library of Congress. The digital images available online are amazing and easy to search, browse, and enjoy. Click the link, type in a subject that interests you, and see for yourself: http://www.loc.gov/pictures/