A couple of weeks ago on my lunchtime walk, it was hot, my bare shoulders burned in the direct sun, and I was a little sweaty. However, the stunning architectural view looking east up Market Street toward the steely Gateway Arch, glistening in the afternoon sun, negated any physical discomfort. The sky was brilliant blue, my brain was taking a much-needed break, and my eyeballs were relieved to see something other than my computer screen. My cellphone buzzed in my brown and black Coach satchel, strapped across my shoulder, and shattered my serene respite from the workday. I stopped walking and dutifully pulled the phone out of the bag and squinted at it in the bright sunshine. Nothing important. Of course. Just a junk email. As I began to replace the phone into the usually convenient side pouch of the satchel, it slipped from my sweaty fingers and crash landed, face down, on the smoldering sidewalk. It was one of those times when a few seconds unfold in slow motion right in front of your eyes, but you are paralyzed, unable to intervene, powerless to prevent the unfortunate consequences you know are coming.

I stared down at my poor little IPhone, Snoopy on the back of the phone case starring back up at me, beaming cuteness that belied the shattered glass beneath it. I cringed as I replayed the sound of the cracking the phone had made when it smacked down so hard on the pavement. I just looked at that damn phone, unable to face the truth, unable to rescue it from its pathetic position at my feet. And then I heard Mack giggle. And then I heard Mack quote Monalisa Vito in My Cousin Vinny as she was finally admitting to her fiancé that the drippy faucet in their crappy hotel room was not functioning within normal parameters. I heard Mack’s voice loud and clear, cutting through my stunned silence, mocking my failure to keep my cellphone safe from the cruel world on a hot and sweaty day in St. Louis. I closed my eyes, I shook my head from side to side, and Mack, in her best, oft practiced, nasally Brooklyn accent, said: “yeahhh, it’s brrroken.” And then she giggled at me once more.

In 20 years or whatever it’s been since I have been using a cellular device, I have NEVER, before now, lost or broken a cellphone. Mack was the lucky beneficiary of my good cellphone record; because that kid had more broken and lost phones than working and found ones. Mack was the kid whose cellphones were always cracked, scratched, disfigured, missing parts, or on the fritz. Mack was the kid who dropped a cellphone off the railing of our front porch into the late summer foliage below, where while preparing the yard for spring plantings months later, I found it, crusted with soil, rusting, and wedged into the dirt among the Hosta sprouts. Mack was the kid whose friends provided backup phones because she had lost or broken yet another of her own. Mack was the kid who used every single one of my cellphone upgrades and her dad’s cellphone upgrades (as well as her own) for nearly a decade. I mean, seriously, during Mack’s reign of terror on her cellular devices, I used one flip phone for SIX years!

For those of you who did not know Mack and may suspect that I am engaging in gross hyperbole or perhaps even slandering my dear sweet girl, just read the following series of Facebook posts from one year in the life of “Mack with a Cellphone”… 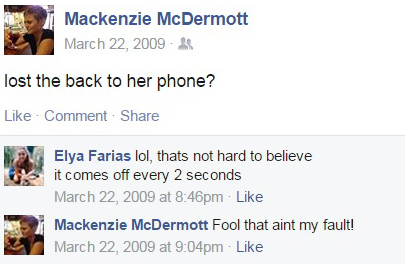 As you can guess, in 2009 (and every other year, really), I yelled and screamed and carried on about Mack’s irresponsible cellphone ownership. I also frequently set myself up as a model example of responsible cellphone ownership, bragging about my perfect record and flashing a pristine cellphone screen and a shiny cellphone casing with all of its corner’s and its back intact. Yet Mack was never impressed. In fact, she thought it was absolutely ridiculous that I was so careful and so perfect and so smug. And do you know what? I think maybe that little imp nudged my phone from my sweaty and precarious grip that day on a St. Louis sidewalk when I so spectacularly shattered my phone as well as so spectacularly shattered my superhuman streak of responsible cellphone ownership. But, whatever and no matter. By the time I had found the strength to pick up my phone and to inspect the carnage, I fully understood why Mack was giggling at me; and I had to giggle at me, too.

Here is my phone and my girl. Don’t you think she at least looks a little guilty? 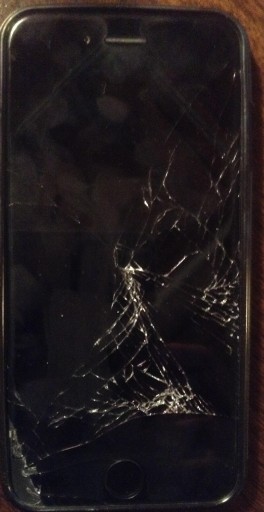