If Mack had conducted interviews for potential best friends, Jackie would have aced a Mack-best-friend compatibility exam:

Mack: Do you giggle easily and often?
Jackie: Yes, and I squeal, too.

Mack: If you could, would you eat sushi every single day of your life?
Jackie: Yeah. Duh.

Mack: Do you love playing sports?
Jackie: Yes, soccer is my life.

Mack: Do you live in sports shorts and t-shirts with writing on them?
Jackie: Yes. And dresses suck.

Mack: Do you own at least five pairs of Nike athletic shoes?
Jackie: More like ten. Or maybe fifteen.

Mack: Does your mom buy Choco Pies, and will you bring them to me at school?
Jackie: Yes, she buys the good Korean brand. And yes, I will keep you supplied.

Mack: Do you love penguins?
Jackie: Penguins are the love of my life. 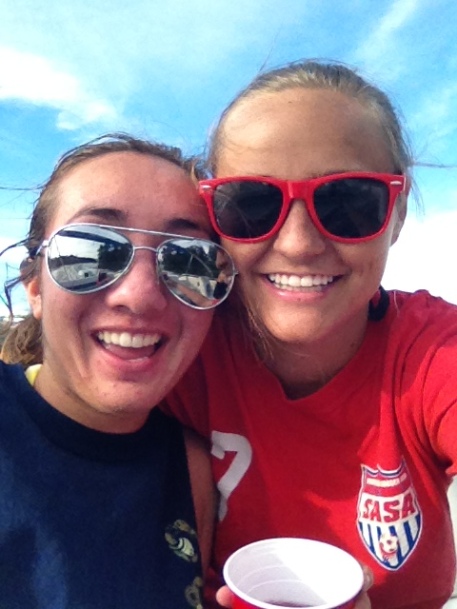 In sports t-shirts and sunglasses.

Jackie—or “Yackie” as Mack frequently called her—was a fast friend and a permanent presence in Mack’s life since the very beginning of sixth grade at Franklin Middle School. They were both unapologetic tomboys who could the rock basketball shorts in a sea of girls in summer dresses. Basketball teammates and after-school TV buddies, those girls giggled more than they talked, likely consumed more junk food than any other two athletes on the planet, and were in constant competition for the title of “Most Accomplished Procrastinator” in the history of Springfield High School. Mack would always claim the title for herself, but she was very quick to give Jackie her props for being a “terrible Asian” because homework was such a low priority. Being called a “terrible Asian” would send Jackie into a fit of giggles; and then she and Mack would watch TV or goof off instead of doing their homework…again.

Mack and Jackie had a lot of goofy in common, but I observed pretty early on in their relationship that they had a bond based to a large extent on their individual comfort in defining femininity in their own damn way. Neither had any personal qualms about balancing her inner girl with her inner boy, but I believe that having each other to walk that unique girly-tomboy path emboldened their individual spirits and gave them extra strength to navigate the gendered dramas of junior high and high school. With Mack in her basketball shorts, Jackie in her soccer shorts, and both of them in sports t-shirts and over-sized sunglasses, they faced the world on their own terms. And, together, they always had a blast doing it.

The hijinks never stopped with Mack and Jackie, but the story of a Penguin named Pete takes the prize. Senior year of high school, Mack took a glass-works class, and for an early project in the course, she created a tiled mosaic of an adorable cartoon penguin. She was wide-grin proud of that penguin she named Pete, showed it to all of her friends, gave it personality traits, told stories about its life, and kept it in her locker all year. From the moment Jackie laid eyes on that penguin, she wanted it for herself. She asked Mack if she could have it. Mack said no. Jackie, however, was a determined young woman. And a somewhat sinister one, as well. Repeatedly, throughout the school year, Jackie stole Penguin Pete from Mack’s locker. Repeatedly, Mack would hunt him down and reclaim him, always dramatizing the emotional scars wrought by the separation. The girls laughed and fussed over that penguin all year long, turning their senior year into an entrenched battle for the love a hand-made, tile penguin. Mack finally brought Penguin Pete home in order to keep it safe from Jackie’s frequent heists, but that child even tried to steal Pete from Mack’s room, too, during her graduation party!

For whatever reason, maybe just because Mack had made it, Jackie loved Penguin Pete. In a lot of ways, Jackie was Mack’s little penguin. Not at all in a condescending way, but in a loving and endearing way that perhaps only Mack could have expressed. In Mack’s mind, it was simple. Jackie loved Penguin Pete. Mack loved Jackie. And so in June 2012, Mack presented Penguin Pete to Jackie for her birthday with this note: “Me giving you my dear friend Penguin Pete is a true test of our friendship. It hurts to part w/ my buddy, but I know you’ll take good care of him. Treat him well & make sure he remembers me fondly. Love, your bestest friend EVER, Mackenzie.”

I love this Mack-best-friend story because it reveals the multi-layered aspects of one special friendship. This story represents shared interests, silly fun, cherished memories, and the tangible and priceless mementos of life. The tale of Penguin Pete should also serve as reminder to all of us all how important it is to tell the people who are central in our lives how much they matter to us.