Mel-O-Cream donuts are as much of an institution in Springfield as Abraham Lincoln and Illinois state government, and I raised my girls on them. Dozens and dozens and dozens of them. Those glorious, sweet and pillowy, sugary delights were a nearly weekly treat for all of us, but my Mack was a certified donut monster. She loved all Mel-O-Cream donuts, except the ones with nuts; but her favorites were the glazed donuts featuring a generous dollop of lemon curd, Bavarian cream, and all of the varieties that were covered in powdered sugar. On Sunday mornings, we would get a dozen donuts (three for every member of our skinny little family), and we would eat ourselves into sugar comas while drinking black coffee and reading the morning newspapers. It was not a healthy family tradition, but it was a cherished one. 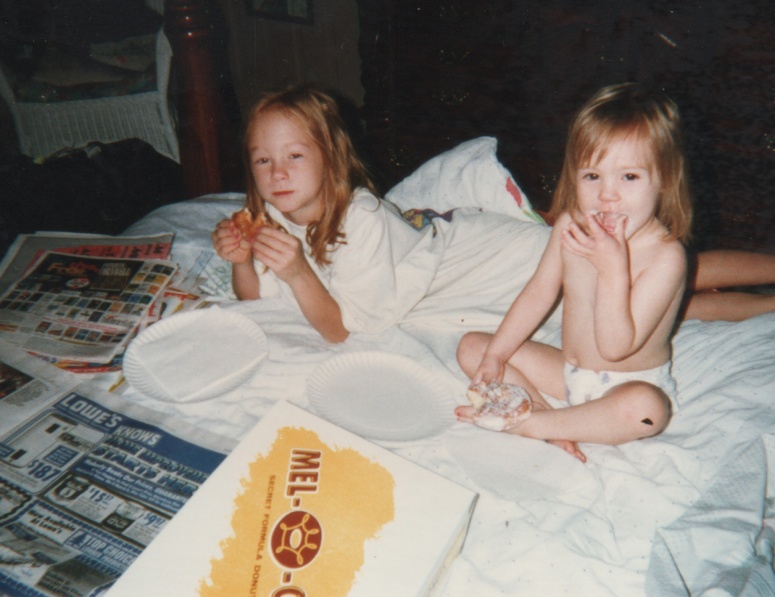 Not only did Mack exuberantly participate in the McDermott weekly three-donut tradition, she added to it whenever possible. We took donuts to weekend team practices for various sports, she chose them over cupcakes for school birthday celebrations, and once she was able to drive, she frequently got up a little early so she could swing by Mel-O-Cream to collect her favorite portable breakfast. The floor of her junky Jeep was littered with those small, square, old-fashioned napkins with the Mel-O-Cream logo.

When we moved to St. Louis, we were sad, and Mack particularly so, to leave Mel-O-Cream behind. Giving up that special family donut tradition was a disappointment. However, if we had not moved, a nutritionist intervention would likely have been necessary.

Yesterday, I was in Springfield for work, attending a staff meeting. As editorial meetings at the Papers of Abraham Lincoln are always ponderous and protracted, a favorite colleague told me he was bringing a dozen Mel-O-Cream donuts to get us through the day. In route to Springfield that morning, my mouth watered and my eyes glazed as I anticipated the sugary goodness that awaited me. I thought about Mack, too, and how much she always craved those donuts. When I got to work and opened the lid of that beautiful donut box and gazed upon the lovely assortment of breakfast treats, I sighed deeply, smiled broadly, lifted a perfect glazed donut with a generous dollop of lemon curd, and toasted Mack by taking a Mack-sized first bite. And then I ate two more donuts! Mack would have been proud.

I felt fat and ashamed about my three-donut day until this afternoon, when my Mack whispered in my ear and said, “It’s ahhright, Momma Bear. If I’d have been there, I’d have eaten four.” As usual, Mack was right, and it was perfectly alright that I had detoured from my usual healthy diet. I had nothing to be ashamed of because dammit, I enjoyed those donuts. They were delicious, and they made me happy. While I do not plan to revive the McDermott three-donuts-per-person plan any time soon, I had to admit to Mack, to me, and now to all of you, that I loved those three donuts with gleeful abandon, that maybe I even needed those donuts, and that I will harbor no shame for paying homage to an old McDermott family tradition from our Springfield days.