Mack loved eating, spending time with animals, and watching her favorite television shows, but I believe her favorite activity was making people laugh. For my funny girl, laughter was the essential ingredient for a good life; and I can say with certainty that Mack laughed every single day of her wonderful life. Laughter soothed Mack’s soul, and she developed a passion to evoke laughter in the people around her. She loved to be the cause of a good giggle, to bring on a big belly laugh, or to start a contagious chuckle; and she was particularly delighted if she could cause you to blow soda out of your nose.

Mack employed various strategies for unleashing an outbreak of laughter around her, and her methods reflected the sensibilities of her own inner child. She made up silly songs and sang them in ridiculous voices, and she performed her own unique renditions of popular songs. In a squeaky register, for example, Mack would sing: “And I’m on tonight, you know my hips don’t lie, and I’m starting to feel it’s right,” mimicking the singer Shakira but also adding a Mack-silly twist by singing out of the side of her pursed lips. Mack danced like a fool, could talk right through a belch or a yawn, told stories in a horrendous cockney accent, and always ratcheted up the teen slang with a heavy dose of nerd. Mack relished her repertoire of really, really bad jokes (many straight off of Laffy Taffy wrappers), and she made up her own dumb jokes as well. Of her Mack originals, one of my personal favorites was: “Why did the squirrel cross the road?” There were many that started with this question (and others that started with a chicken), but every time Mack began a joke in this way, she would lean in with an expectant look on her face and pause as she waited for her victim to nod, and then she would shout out the nonsensical answer: “Because there was bacon on the other side!” Mack would usually start giggling before she could offer the entire punchline, and people were laughing before they even knew just how bad the joke was going to be.

But while silly singing, crazy voices, and lousy jokes were useful tools of her laughter-seeking occupation, it was probably the art of the funny face that drew the most laughter. Mack could suck in her lips or bug out her eyes and make us all laugh without saying a single word. Mack’s humor was mostly of the low-brow variety, was usually self-deprecating, and was always fair and good-natured; and since she liked to use herself as the target for most of her humor, she rarely engaged in excessive teasing or orchestrated practical jokes at the expense of others. But there was one practical joke that Mack deemed particularly successful for the laughter it produced; and because it is a personal favorite Mack-story of “Stapes,” Mack’s beloved high school golf and softball coach,” I offer it here in his words:

“One evening after a golf match, the girls were getting brand new golf bags. Their old bags were going to the junior varsity boy’s golf team. Mack asked if her and fellow teammate Becca Ramirez could be the ones to give the bags to the younger guys. She and the rest of the team started laughing, so I knew something was up. After some conversations back and forth, I convinced her to let me in on the joke, because with Mack, she was always up to something. Mack said that her and Becca purchased 10 boxes of feminine products and planned to stuff every pocket in the bags with them. Now image, with me, if you can, 14-year-old boys getting ready to practice with their new Springfield High bags only to find them loaded with tampons. So, of course, I looked at Mack and told her to go ahead and proceed.”

With the approval of her coach, Mack then carried out her humorous plot. She giggled throughout the plans, she laughed long and loud with her teammates as they stuffed the golf bags with tampons, and she chuckled every time she told people that “Stapes” had joined in the laughter, too. But the belly laughs of those boy golfers were the laughs Mack enjoyed the most. They were a new audience for her, and it tickled her pink to learn that she was capable of sharing a good laugh with people outside of her own circle of friends and teammates.

Oh Mack, you were a natural, my dear. We enjoyed the giggles we shared with you, we treasure the laughter you brought us, and we know that every day you made us laugh was a day worth living. 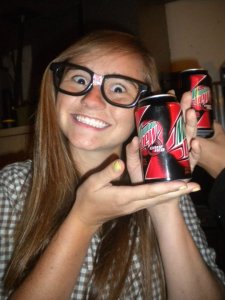 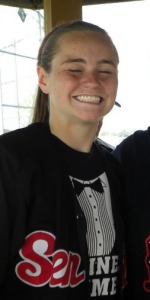