In the summer of 2004, Mack was a ten-year-old rising fifth-grader playing on a competitive basketball team with girls who were a year older. After a schedule of local games in Springfield and a few area tournaments, the Sonics ended up in a regional tournament at Indiana University. We were happy to give Mack a serious basketball experience and excited to enjoy a simple, summer family getaway as well. But it was one of those crazy years that the Illinois legislative session continued well into the summer; so Kevin, who covered Illinois politics for the St. Louis Post-Dispatch, was unable to leave town with the girls and I on Saturday, July 17, for the drive to Indiana. When I pulled out of the driveway that morning in our brand new Honda Element, I had no idea that this little trip to my native state would be such a significant one. That trip gave Mack an experience that inspired her throughout her basketball playing years, turned out to be a fateful one for Savannah, and conferred upon me a special, memory-making, all-girl road trip with my two favorite people in all of the world.

We spent the first half of that week-long trip in Bloomington, Indiana, wandering around IU’s campus and watching preteen girls play basketball. Mack was so happy and comfortable to be the little kid on that basketball team, and playing at the tournament with them was exhilarating to her. The Sonics lost in the championship game, but Mack was not disappointed. She was such a wise little kid, breathing in the experience, just thrilled to be dribbling with the big girls. She was also honored to be a chosen as a rebounder for a teammate participating in the three-point shooting contest that took place on the Hoosier’s basketball court. Standing on that hallowed Hoosier hardwood was a dream for Mack, and the experience inspired her for her entire basketball career. 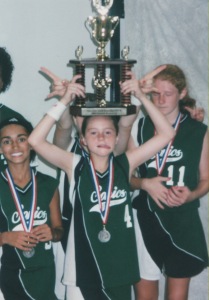 Savannah, who had not been all that thrilled about our basketball-centric trip when it had started, was inspired, too. But for her, it was not the basketball that offered the spark; it was the lush green and floral landscapes, the Indiana limestone buildings, and the meandering medieval-style walls of the outrageously gorgeous IU campus. As it happened, Savannah was preparing to begin her all-important junior year of high school that fall, and college was very much on her mind. On that summer trip, she fell in love with IU. Had it not been for Mack’s basketball tournament, Savannah might never have considered Indiana University at all, let alone chosen it as the perfect fit. Mack always took a little credit for Savannah’s decision to attend Indiana, arguing on many occasions that all roads lead to the Assembly Hall in Bloomington.

The second part of our all-girl road trip was a bit on the wacky side, but it has remained one of my favorite vacations. We left Bloomington after the tournament and drove south through scenic Hoosier National Forest. Driving through the southern portion of Indiana with my girlies was such a treat, and we all giggled and sang and Mack drove Savannah and I crazy with her bad jokes from the back seat. When we drove through Jasper, Indiana, Mack and I rolled down the windows and yelled hello to Scott Rolen, her favorite Cardinal baseball player, who grew up there. I am not even sure how Mack knew that little piece of sports trivia, but she did; and we paused ever so briefly to acknowledge it. We stopped at Santa Clause, Indiana, just long enough for a photo opportunity, and then we settled in at a resort hotel in New Harmony, Indiana, along the Wabash River. I had promised loads of time in the fabulous hotel pool, some good food, and a movie of their choice (we saw “Dodgeball,” which Mack declared was the best movie of the year). But as usual, I had a little history on the agenda as well.

New Harmony is a tiny, historical town that possesses great charm if you are a nerdy history buff like me, but it holds little allure for kids. Therefore, I had my work cut out for me. We walked around the town center looking at old buildings, and I picked up some tourism flyers and purchased a little book about the historical beginnings of the settlement, founded in 1814 by religious dissidents called the Harmonists. One night after dinner and swimming, I read to the girls about the funky little colony, its quirky residents, and its fascinating history. They rolled their eyes, not even pretending to pay attention, and went back to whatever they were watching on the TV. I left them alone and turned my attention to the tourism materials, which revealed a fantastic, historical secret weapon.

The next morning, I drove the girls to the edge of the town for a little surprise. Apparently, when they established New Harmony, the Harmonists built a hedge maze to symbolize their quest for a better life in America. In the 1940s, the residents of the town rebuilt the maze and restored the little building at its center. When Mack jumped out of the car, she ran as fast as she could to the entrance of the maze and disappeared within it. We could hear her cackling and snorting, and we watched as her cute little head, adorned with her backwards Green Bay Packer hat, bounced up and down as she raced through the maze. It was absolutely delightful for me to see my little Macko romping through that maze, pretending to be lost, yelling periodically for assistance, and having so much fun. Savannah put on her best this-is-so-annoying teenage face, but even she admitted that the maze was lovely. And, of course, once again, Mack succeeded in dragging her big sister into the fun as well, encouraging her to succumb to the absurdity of the three of us in a remote and tiny town in southern Indiana exploring a maze made out of bushes.

We spent a good hour exploring that maze, enjoying the cool-for-summer day, before driving back home to Illinois. It was one of the silliest and most simple things we ever did together, but it remains one of my favorite memories. We had embarked on the trip for a basketball tournament, and we finished the trip with so much more. Mack lived a basketball dream and collected some Hoosier inspiration. Savannah found a college. I had my girls all to myself for a precious few days. And we all felt the magic of a hedge maze. 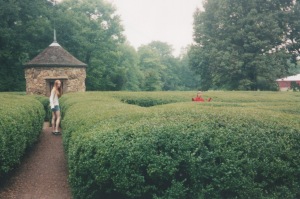 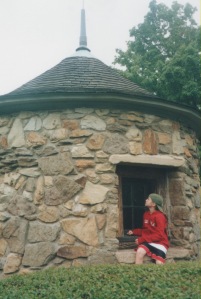 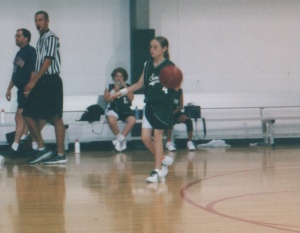 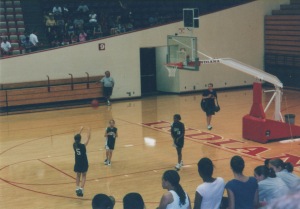 One thought on “Hoosiers and a Hedge Maze”