Since we are on the topics of both Mack’s animal loving heart and her impish nature, I want to offer one of my favorite stories that illustrate both. When Mack was in middle school and Savannah was at Indiana University, Mack decided she wanted a bunny. Since she really had no good bunny arguments to make to convince us to add a bunny to the McDermott Menagerie, she relied on her wit and determination instead. She found clever and not so clever ways to work “bunny” into conversations every day. For weeks and weeks she regaled us with bunny talk. Sometimes she would discuss the delightful qualities of bunnies. Other times she would show me pictures of adorable bunnies doing adorable things. And when she was feeling less creative but still tenacious, she would just look at me, tilt her head adorably and say “bunny.” No context. No persuasive argument. Just the word “bunny.” I actually started to look forward to how Mack would work “bunny” into her daily dialogue with me.

It was also around this same time that Mack started to ask for extra chores so that she could earn a bigger allowance to go bowling with friends or to the dollar store after school. While I never really believed that she and her friends actually bowled (although I learned recently from her friend Justice that they did, indeed, bowl), I did believe that Mack had turned a corner. “She wants to earn her own pocket money so she won’t have to scam all of her mother’s dollar bills and loose change,” I thought. It was only in hindsight that I would discover the errors in what I know now to be seriously flawed logic. Don’t judge; those dimples of hers were quite powerful.

After several months of bunny talk—and after a point when Kevin and I were working “bunny” into our own conversations—Mack made initial inquiries about the purchase of a bunny. She learned that she had enough cash for said bunny but, much to her chagrin, she also learned that a child of her age could not just walk into a pet store and buy a bunny. But remember, my friends, this is Mack about whom I am writing; and Mack Attack never gave up on anything. Enter: sneaky, college-aged sister. Of course, Mack’s initial bunny inquiries, the bunny buying discrimination, and the reason behind an unscheduled visit from Savannah were all completely unbeknownst to me at the time.

So Savannah came home from college. Mack and Savannah plotted the timing of their illicit purchase. And the two little criminals drove to the mall. Yes, Savannah would have been allowed to purchase the bunny. Yes, the bunny was within Mack’s budget. BUT, my devious daughters had failed to factor in the cost of a bunny hutch, quite an expensive item I understand. Savannah was willing to be a part of the plot, but she was not willing to cough up the extra cash for bunny housing. Some children would have given up and gone home and forgotten about the whole thing. Others would have gone home and saved more money and then tried again later. Others might have spent the money at American Eagle. Mack did none of those things. Instead, she counted her money and evaluated what other small-rodents-with-appropriate-housing opportunities were available that day within her price range. She picked out the cutest teddy bear hamster in the store, selected an appropriate cage, and picked out some food. Savannah fronted as the purchaser, and Mack brought home Strawberry Fabio McDermott.

I should have been mad, and maybe I was at first. But it was always so damned hard to deny Mack when she displayed such fixed determination. I also knew that getting that hamster would satisfy the desire for a bunny. Strawberry Fabio (don’t ask, because I have no earthy idea about the name) lived in Mack’s room for two years. He cruised around our house in his little hamster ball; and we all came to appreciate his company. Mack never abandoned the care of her little guy and spent time with him every day. She loved him as much she loved all of the other pets we ever had. And I never regretted allowing him to stay. 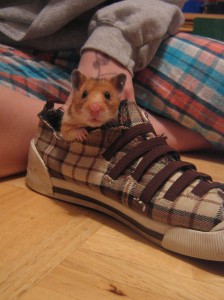