On the eve of Thanksgiving, it seems appropriate to share this particular story about Mack. It is yet another one of those quirky things about her that I have often referred to as a Mackism or described as “so Mack-like” or as a “Mack-thing.” But it is, more importantly, one of her personality characteristics that should inspire us all as we look forward to the bounty of food we will enjoy on Thanksgiving Day.

One of the greatest joys in Mack’s life was food. She loved junk foods like Funyuns and painfully sour candies, but she also craved fresh fruits and vegetables. She adored a greasy American bacon-cheeseburger with fries, but she needed a steady diet of ethnic cuisine as well. She was obsessed with bacon, Korean Choco-Pies (thank you, Jackie, for feeding that obsession!), mangoes, sushi, Arizona iced-tea in the big green can, and curry fried rice, to name just a few of her favorites. But no matter what she ate, she always took time to reflect upon the food she was shoveling into her mouth, to slow down when it was almost devoured, and to take time to savor it in the end.

Many kids are picky eaters, and most do not give a second thought to the food they eat. With the exception of tomatoes, peanut butter and turkey, Mack was not finicky. In fact, from about the age of two when she already had an affinity for spicy salsa, she possessed a sophisticated palate beyond her years. Most uniquely, however, she was a kid who appreciated food, always thanked me for cooking, and spent a large percentage of the little talking she did do on discussing the food she was going to eat, the food she was eating and the food she was planning to eat.

On a daily basis, Mack also engaged in an eating ritual uniquely her own and one that beautifully illustrates her uncommon appreciation for food. When she was quite young, she started a ritual that became a daily routine in her life: as she was eating, she always planned for a perfect last bite. If she was devouring a bag of Warheads, she made certain her favorite flavor was the last one. If she was enjoying a plate of pad see ew, she moved an exacting ratio of the various ingredients of the dish to the side of the plate to save for the very end. If she was warming herself with a big bowl of my homemade broccoli-cheese soup, she made absolutely certain that there was a big, fluffy floweret of broccoli for the final spoonful. And when it was time for her perfectly designed last bite, she cleansed her palate and consumed it slowly and with much delight.

Rarely did Mack discuss this ritual or draw attention to it, but it became obvious to people who dined with her on a regular basis. Occasionally, I would prepare my own perfect last bite if we were sharing a particularly good meal; but it remained, mostly, a Mack-thing. In honor of Mackenzie, however, I am not only going to take up her perfect last-bite religion on Thanksgiving this year, but I am also going to make a concerted effort to make it a regular part of my life. I do not know why I did not adopt it before, because saving a perfect last bite makes so much sense. I do not know why I thought of it only as another goofy Mackism, because, you know what, Mack’s respect and appreciation for food should have inspired me a long, long time ago.

Mack never presumed to tell people how they should live their lives, so it is not surprising that she never proselytized her perfect, last-bite ideology. But unlike Mack, her mother is far less shy about conveying her opinions to others. So even though Mack might find it unseemly, I am going to urge everyone at my table this Thanksgiving to think about a perfect last bite as they eat through all of the dishes before them. I am going to ask them all to prepare and to slowly savor a perfect last bite.

And I am going to take the proselytizing one step further by imploring all of you to be a little more Mack-like tomorrow. To slow down, at least a little, at the end of the meal. To pause a moment to appreciate the good food. And, most importantly, to savor and to take particular delight in your own perfect last bite. 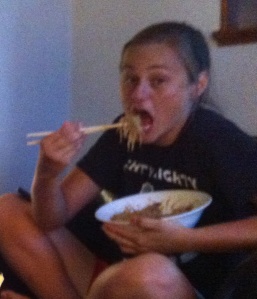 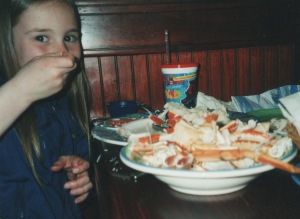 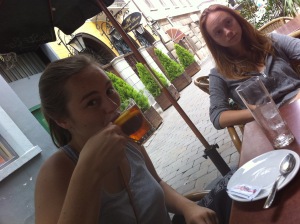 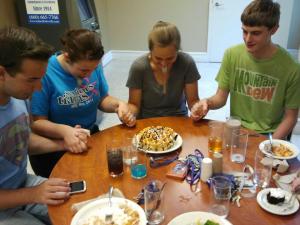 P.S. One of Mack’s best friends, Jackie Pascoe added the following message and a picture of Mack contemplating a perfect last bite…

“This was definitely a Mack-thing. I remember Mack doing this all the time whenever we’d get sushi; she’d save the last piece of her favorite roll for her last bite, and it even encouraged me to do the same. Mackenzie would even be her goofy self before her last bite (as shown in picture below). And yes, Mack could not get enough of those choco-pies but I definitely enjoyed watching her eyes light up whenever I would bring her one or even a box of them.” 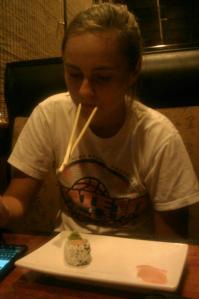 7 thoughts on “The Perfect Last Bite”