I practiced the first six years of motherhood on the sweet and precocious Savannah, a red-headed and brilliant little drama queen who changed my life forever. Before her, I was a hard-drinking, self-centered material girl of the ‘80s, and immediately after she arrived in the world on March 23, 1988, I had a purpose in life that was way, way bigger than my hair. Savannah uttered her first words at nine months, was stringing articulate sentences together at one year, and she’s never really shut up since. I have always loved that about her…you never have an excuse not to know exactly what the hell is on her mind. Kevin and I showered our princess with affection, obsessed over her health and wellbeing, and spoiled her just a little bit rotten. We talked a lot about raising her as an only child so that we could give her every advantage that was possible in the world. However, in the end, we agreed that the best thing we could give her was a sibling. Cherishing a sister of my own, I was over the moon when I delivered a sister for Savannah just six days shy of her sixth birthday on March 17, 1994.

Mack was a chubby but athletic little toddler, and kind of a little bruiser. Savannah was a dainty and cerebral child who would sit quietly for hours reading a book. Mack skipped crawling and started walking at eight months, and very soon after that was able to run after her big sister. Watching my barefoot toddler chase after (and sometimes terrify) my skinny and giggly girly-girl in ruffled socks was such a hoot. Savannah would yell and scream at me to make her sister stop, but she already knew what needed to be done. Savannah would drop to her knees, hold out her arms, and Mack would barrel into her with a monster hug. My girls were so different from each other, and it was a joy to watch them navigate the world in their own individual ways. In large gatherings with family, and especially within our close circle of friends in Springfield, Savannah sat with or spied on the adults, while Mack led the gang of kids as far away from the grownups as was absolutely possible. Savannah talked early, but had no interest in athletics; Mack walked early, but didn’t talk until she was almost two. I always teased Savannah by saying that Mack didn’t talk because she couldn’t get a word in edgewise. But when Savannah left for college, and Mack did not step in to fill the silence, I knew there was no truth in that at all.

The six-year gap in their ages was sometimes difficult, and my girls did not always get along, but they adored one another. Sometimes it was way, way, deep, deep down, but there was a great deal of love between them. Their names for each other offer just one example of their shared respect and affection. When Mack finally started talking, she called Savannah “Sissy.” It may have started because she couldn’t put her tongue around the word Savannah, but it stuck even after she grew up because she idolized her big sister. While most everyone else called Mackenzie “Mack,” Savannah never did. She always referred to her by her full name and often chastised her dad and me for cheating her sister out of her full Irish name and calling her a name for a boy.

Sometime around 1996 or 1997, we were all three in the bathroom. I was giving Mack a bath, and Savannah was assisting me. We were all singing and laughing, and Mack was probably drinking the bath water and splashing us. It has always been a habit in our family to make up silly songs and jingles, and Savannah made up a song about her baby sister. Although it’s pretty bad, it’s one that has stuck with us all these years. Savannah will probably cringe that I’m writing it here, but the embarrassment of my girls has never stopped me from doing anything before, so here goes:

She is the nicest thing we’ve ever seen!

in her birthday suit.

She’s our “special” child (and, yes, Savannah, added those quotes–probably because her sister was drinking the bath water!)

We have had so many laughs over that dumb little ditty, and now it is even more precious to me than ever before. Part of my overwhelming grief in the loss of my Mack is feeling so keenly the loss of Savannah’s Mackenzie. My precious older daughter has lost her baby sister. I certainly do not know what I would do without my sister; and I am heartbroken that the greatest gift we ever gave Savannah is gone. I do not know how she will ever accept this terrible loss; and I don’t know how I will ever accept mine. But one thing that is absolutely certain: I still have one very precious and dear reason for living. And I will do everything in my power to show my beautiful Savannah that she is not alone, that her sissy will be in her heart for the rest of her life, and somehow, we will survive this horrible tragedy together. 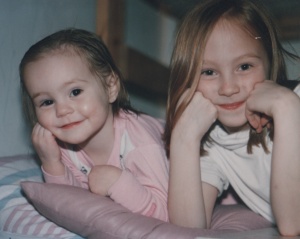