In my recent “Dreams at 11” blog, I featured a letter that Mack wrote about her basketball dreams. In that letter, she noted that Diana Taurasi was her favorite college and WNBA player. And in the photograph I included of the 11-year-old Mack in front of that giant basketball, she is wearing her Diana Taurasi jersey.

Of course, I had no idea how timely this post would actually be…

Yesterday, the Phoenix Mercury, Diana Taurasi’s team, drafted Mack’s friend and former basketball teammate Alex Harden as the 18th overall pick in the WNBA draft! Mack played recreational ball with Alex and they were teammates at Franklin Middle School. Mack thought the world of Alex as an athlete and as a top-notch kid with a great deal of character. Mack would be absolutely over the moon about this exciting news. Mack’s best friend Justice Collins agrees: “I mean Alex gets to be Diana Taursi’s teammate'” she said, “doesn’t get much better than that. Mack would have been stoked.”

I cannot help but believe that Mack’s spirit will be on the sideline when Alex takes the court for the first time as a teammate of Mack’s childhood idol. 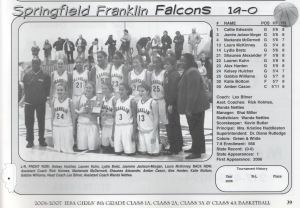 One thought on “Dreams at 11: Addendum”